Wine And Symbolism In Art

Wine has long been an important and historical symbol. Wine was, after all, Jesus’ first miracle (though the creation of wine itself dates back to 6000 BC) and it continues to coat the mouths of both believers and non-believers alike. The Greeks even have an entire god, Dionysus, dedicated to wine. It is one of those divine gifts that seems to contain mystical properties. One could even argue that it’s a fountain of youth of sorts, getting more vibrant with age. Witchcraft. The implications of wine and the idea of wine, in general, are enough to warrant its symbolic presence in art. However, because its list of characteristics is so giant, it’s difficult to pinpoint what it really means when it appears in a painting.

Wine has long found itself wandering as either a religious or secular symbol the tablets and mosaics of the ancient Greeks, Egyptians, Lebanese, and so on. It’s prominence only grew during the Medieval times and has bled into modern art. In fact, there’s such a connection between art and wine that it’s almost required to be served at any art opening or show. The same can’t really be said for beer or tequila, although that would be fun. So, what does it mean? Symbolism in art is perhaps most easily demonstrated via the still life painting (which often features wine). To some, a still life registers as a bowl of fruit on a table. For lack of a better phrase, who cares? However, that bowl of fruit is often indicative of a larger meaning. Fruit is something that is delicious for a moment before it spoils. It hits a peak ripeness and then perishes. For artists, it is symbolic of the brevity and transience of life and a reminder of who we are as fruitful beings. Fruit has an interesting relationship with wine because wine is created with fruit. But, as we mentioned, wine improves with age. It survives well past the human lifespan and serves as a legacy of labor, celebration, and good times had. When fruit and wine dance together in paintings they create a powerful juxtaposition between the idea of time and growth. The miracle of life.

To deepen our understanding of wine as it relates to art, let’s take an example by one of the most famed artists in history: Pablo Picasso. Here’s a 1926 work titled, The Wine Bottle. 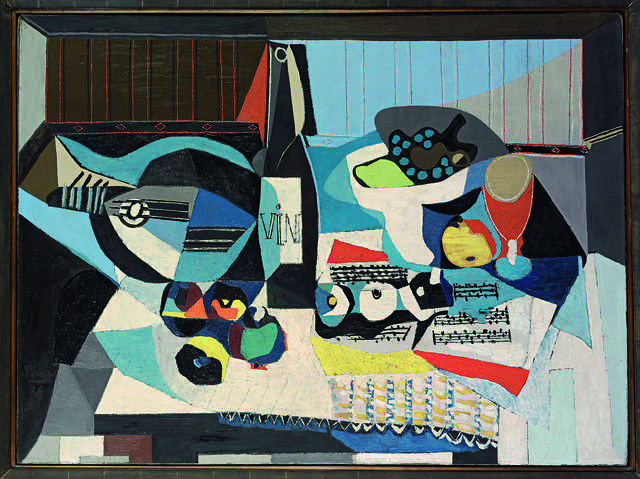 For Picasso, every stroke and form contained meaning inside of it. As the father of Cubism, his still life paintings were abstract in a way that had never been done before. They were intense, full of life, and obviously able to stand the test of time. This painting in particular adds elements of music, another form that seems to canonize with age (and yet only lasts for a moment). Picasso loved to incorporate various perspectives and distort the familiar. It’s impossible to sum up the meaning of this work in a sentence, paragraph, or even a book frankly (and that’s why Picasso is Picasso); however, one could surmise that this is a representation of a distorted, yet beautiful, moment in time defined by a bottle of wine. There’s movement, joy and mystery that leap from the work and inspire in the same ways that a shared bottle of wine over music might. And yet, it’s also intimate. For those of us who are lucky, intimate nights filled with music and wine have briefly bounced throughout the timeline of our lives. That in itself mirrors the brevity of youth, similar to a still life. But, this image is a work of art, designed to last. The longer you look at it, the more value it has, like wine.

Wine’s connection to symbolism within art doesn’t read like a tightrope but rather a spiderweb. There are so many nooks, twists, and thoughtful notions that can be gathered the minute the idea of wine enters into the scope of the canvas, and that’s what makes it such a powerful and magical symbol. Wine seemingly lasts forever, but it shouldn’t be taken for granted or glazed over when it shows up in works of fine art. Rather, we should appreciate it in the way it appreciates: As a solid investment of time, money, and art that stains our brief time on this planet… and our teeth.

Share:
Categories
Recent Posts
How The Price Of Wine Has Changed
Barterhouse
Champagne Vs. Prosecco
Barterhouse
Summer Wine Hacks!
Barterhouse
Predictions for Wine in 2021
Barterhouse
Burgundy And US Wine Tariffs
Barterhouse
Wine Subscription Boxes… Are You Getting Duped?
Barterhouse
How Weather and Temperature Alter Wine
Barterhouse
Instagram Follow Us @Barterhouse
The access_token provided is invalid.